Volunteering Abroad_Meeting People at Their Point of Need 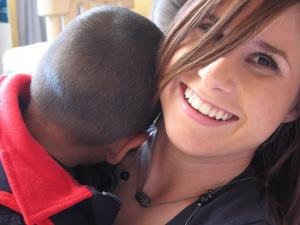 I could not help it but feel a little envious each time I saw friends go on volunteerism or missions trips. At the same time, I felt terribly incompetent to serve. After all, I don’t have a medical degree, and I certainly know nothing about construction or teaching a trade. The bulk of my professional and personal skills appeared utterly useless in the context of global need.

To meet the gap, I tried to be an enthusiastic giver. I could not go, but I could certainly give to those going. However, I still felt as if a part of the puzzle were missing. We are relational creatures and as such we gain tremendous benefits from face-to-face interaction.  I wanted desperately to be part of something big, yet I only had small things to offer.

I was raised in home in which the flag of frugality was flown high and proud. My dad made sure to remind us that there was a clear difference between need and want. In fact, I was not even three when the word superfluous was already part of my lexicon. Given my background I always looked for organizations and individuals that provided need-based help.

One day, while visiting Guatemala my sister asked for my help. She wanted to gift a group of highly vulnerable children with something “superfluous”, a collective birthday party.  For a majority of children in the slums of Guatemala City having a birthdate is a luxury. Little ones are born at home to illiterate mothers who seldom register their birth.  A birthday celebration is foreign to most. I remember asking a little boy in a slum known as La Limonada about his age. He gave me a whopping toothless smile and a firm “I don’t know”.

I reluctantly agreed, while harboring doubts in my heart and questioning the effectiveness of this type of aid. Regardless, I was intrigued and thrilled about having the opportunity to engage with people and somehow have an impact.

We had agreed to provide a little party to the children at Fundacion Debora. The preparations began by heading to downtown and selecting a variety of piñatas. In addition to candy, my dad suggested we purchased colorful toothbrushes for each little one. I don’t know about you, but I never did have a party where toothbrushes were given as a party favor.  So much for superfluous!

Family and friends got together and  packed miniature brown bag lunches with a variety of goodies, from single serving juices to kid-size sandwiches. We also had basketfuls of Beanie Babies. In the slums of Guatemala, most people reach adulthood without ever having received a toy of any significance.

Party supplies in hand we headed to the slums. We walked into Fundacion Debora where dozens of anxious eyes watched with joyful expectation as the team set up the food and games.

We walked out of Fundacion Debora with a smile in our hearts and the realization that we had received far more than what we had given. Fundacion Debora provides vocational training, healthcare and counseling to women in extreme poverty. The preschool is an integral part of their program ensuring the children of women seeking training receive basic care and education.